How to integrate Charmed Kubeflow with Charmed MLflow

This tutorial will guide you through the integration of MLFlow with Kubeflow using Juju with Microk8s. This integration enables true automated model lifecycle management using MLFlow metrics and the MLFlow model registry.

MLFlow is a platform to streamline machine learning development, including tracking experiments, packaging code into reproducible runs, and sharing and deploying models.

MLflow-Kubeflow integration requires a relation between MLflow and MinIO operator, that you will learn more about in the guide. MinIO is used to store artifacts produced by MLflow runs (files, models, images, in-memory objects, model summary, etc). In the last section of this tutorial, you’ll learn how to access the artifact store using MinIO client or boto3 APIs.

Add the relations between components

Run an example model with Kubeflow

Create a new Notebook Server, taking care to specify the mlflow-server-minio configuration, by ticking the box next to it. This will ensure that the correct environment variables are set so that the MLflow SDK can connect to the MLflow server.

For an example code, upload or paste the Elastic Net wine model notebook to the notebook server.

Run the first two cells and observe that your model metrics are recorded in MLflow as shown in the cell output below. You can see the RMSE, MAE, and R2 for the run model. 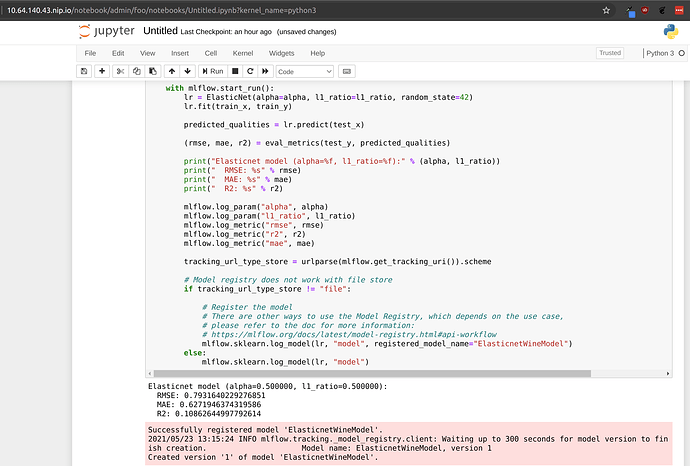 Run the third cell to view a list of files in the object storage.

The downloaded object will show up in the file browser on the left. 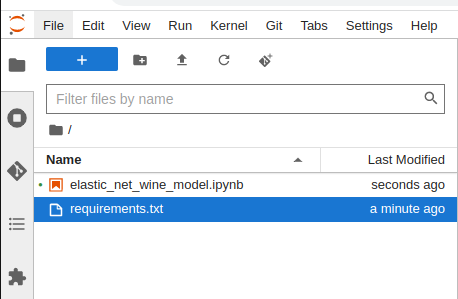 Based on the setup in the Get Started section, Artifacts are stored in MinIO. Artifacts include output files recorded by MLflow runs in any format such as models, data files, and images.

You could access the artifacts using the MinIO client or boto3 with python.

The expected results will look similar to the one below, save your AWS_ACCESS_KEY_ID and AWS_SECRET_ACCESS_KEY as you will need them in the next part to use MinIO client.

Note The environment variables would be the same even if MinIO is not on AWS, it’s based on MinIO’s configuration not the cloud provider.

After that set alias for the MinIO.

Boto3 is the AWS SDK for Python, it provides a Python API to interact with AWS services.

This code is also included in the example notebook.

Note: If you are accessing the bucket outside of a Kubeflow notebook server, replace the os env with MinIOunit’s ip with :9000 at the end.

Help improve this document in the forum.